Some plays let you escape. For at least a couple of hours, you are no longer worried about the assignments you missed, the depressing news stories you heard, or the dread of slogging through another yet another week. The play might even give some degree of optimism you can take with you to remember when things get rough. Then there are the plays that shove your fears and worries back in your face. Living Out falls into the second category. END_OF_DOCUMENT_TOKEN_TO_BE_REPLACED 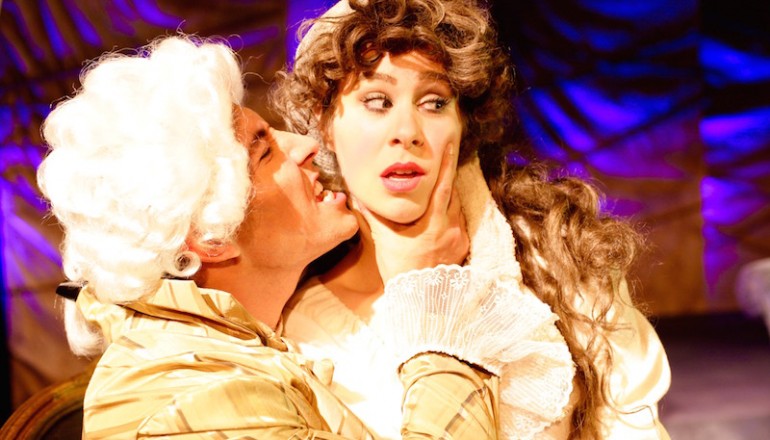 It’s one of those pieces that is both educational as well as intriguing– prior to Friday night I had never heard of the Marquis de Sade, or if I had, his name quickly passed from my memory.  But last week I went to see Quills, a play written by Doug Wright and directed over at Golden West College by Tom Amen.  The story can be considered less based-on-the-life-of and more loosely-inspired-by-the-life-of–and not the least because there are scenes involving visitations from evil spirits or a talking head.  Regardless of technicalities, 18th century France was indeed home to a man called The Marquis de Sade, he was indeed imprisoned for writing stories the Catholic church deemed blasphemous, and he did die inside an insane asylum.  Quills focuses on his time spent inside the Charenton Asylum, and the lengths to which the Marquis will go to make his voice heard.  It’s an interesting storyline with beautiful language, but the actors could have used extra rehearsal time to prepare for the more passionate scenes. END_OF_DOCUMENT_TOKEN_TO_BE_REPLACED

These are high school students, but this is not a high school play. At least it’s not the high school plays I’m use to.  It takes about a minute, but you’ll check your bias expectations at the door and get a heavy heaping of pure Pippin satisfaction.  The voices, movement and overall feel of Huntington Beach’s Academy for the Performing Arts hinges on epic. END_OF_DOCUMENT_TOKEN_TO_BE_REPLACED

March 12, 2016 | CSUF, fullerton, Uncategorized, Video  Like Comments Off on The Merry Wives of Windsor at CSUF – Video |

The Merry Wives of Windsor at CSUF – Video

This video was created by Youtuber Daniel Zrotfl. In his own words it was created to celebrate the 400th anniversary of Shakespeare’s death, and to promote The Merry Wives of Windsor, performing at California State University Fullerton! This video will give you a taste of what you will see when you come and enjoy CSUF’s production!

Founded in 1965, the non-profit Costa Mesa CIVIC Playhouse began at the OC Fairgrounds. In 1984, it was relocated to the Rea Elementary campus. In 2017, the School District will develop an AVID/Info Tech. program for their students’ enrichment which will cause us to lose our lovely non-profit theater. As the “City of the Arts”, the CMP hopes to remain a significant cultural and historic entity in Costa Mesa. Speaking on behalf of thousands of people, many very happy memories and extraordinary life experiences took place at this community theater.

The petition needs at least 200 hundred signatures. It’s as simple as clicking on the link below and signing up on the page.

Audio Review of Fullerton Community College production of Parade the Musical. Recorded directly after the show please excuse the ums.