These are high school students, but this is not a high school play. At least it’s not the high school plays I’m used to. It takes about a minute, but you’ll check your bias expectations at the door and get a heavy heaping of pure Pippin satisfaction. The voices, movement, and overall feel of Huntington Beach’s Academy for the Performing Arts hinge on epic.

Pippin is the story of Charmalange’s son. Who is Charmalange? Charmalage was a great king who conquered and controlled most of western Europe during the Middle Ages. The play can be confusing for someone watching the show for the first time. Though the story is set in the Middle ages –besides Pippin’s lineage and certain scenes, including swords, et cetera –it has very little to do with the time period. The show constantly switches back and forth between Pippin being a prince in the Middle Ages and other moments where he’s in the middle of the biggest, most extravagant circus on the planet (sorry, Ringling brothers). Pippin is told in this fashion because the character Pippin exemplifies the everyman. At its core, Pippin is about man’s need to find meaning, and this theme is delved into in a lot of interesting and creative ways.

The auditorium at Huntington Beach High School provides comfortable seats and a fantastic atmosphere. I was seated directly in the back of the theatre, but I could see and make out everything in the production without having to strain even for a second. I could wax poetically on the architecture of this high school theatre, but there are more important things to write about.

A character called Leading Player –played by Taylor Aragon –leads the show. The leading Player narrates most of the story and is a ringleader. She helps Pippin navigate life to find meaning and encourages him to live an extraordinary life. I believe Leading Player is equal parts genie and Ego. One of the story’s major themes is the need to find meaning over the need to do something extraordinary. The leading Player is the voice that says, “Do more. Be more.” But other parts of life are as important, which the play explores through this dynamic.

Aragon’s performance of Leading Player was entertaining. Though small, she commanded the stage with her voice and utilized her small build effectively. When she barked orders at the other people on stage, it almost had this kind of Napoleonic comedy. It works because she has such a spunky demeanor.

Cole Wachman –in the title role of Pippin –was flawless throughout the entire production. He was a great choice to play Pippin. He threw himself into the role and made me feel for his predicament. There were moments (and this comes with the territory of being the main character) where I would have liked his voice to have been stronger –especially during the song “Corner in the Sky.” That being said, it’s still very good, and he more than adequately sings all of the songs very well, including my favorite song of the night, “Love Song,” which is a duet between him and Catherine (Allyson Peffers) –the love interest in this story. Peffers has an exceptional voice; she hits this character on the head every time she’s onstage. Only Laura Harris (Berthe), playing Pippin’s grandmother, can match Peffers’ performance. Berthe’s song, “No Time At All,” is fun. They have words projected at the top of the stage to allow the audience to sing along with the chorus. Harris plays off the fact that she’s a young actress playing someone old, and because of the loose nature of the play, the audience accepts it, and it becomes a part of the joke.

The live orchestra played consistently well throughout the night. Their performance would please any average theatergoer. The singing from the cast sometimes overpowered the orchestra, which is better than the other way around. There is room for improvement regarding the dynamic with the orchestra performers, but it’s technical and only noticeable to the most nitpicky people.

There’s dancing, acrobatics, and magic all in one show –done with practical effects in the most efficient way I could think of. This show takes a chance with professional elements and hands it to students who probably shouldn’t be this talented, but they step up. My only hope is that before some of these kids hit Broadway or wherever they wind up going, they at least perform at a few theatres in Orange County on the way.

The Merry Wives of Windsor at CSUF – Video
Next Story » 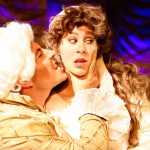